This weekend saw the last race in this winters Open 5 Adventure Race series, this time based out of Todmorden. Practically next door compared to other venues like North Wales and the Lakes. Emma was free that weekend we set the controls to Team Spinach! 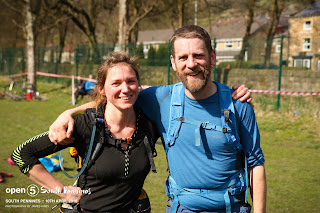 Check out the rest of the (really good!) photos here, it really gives a great idea what it's like to take part in one of these events!

There had been a dusting of snow on the high tops overnight, which made for a nice drive over the moors, and a cloud inversion over Hebden Bridge as we descended.

We arrived in plenty of time so after a tea, a study of the map, getting ready, locating the car key, wheeling over to transition we had about 10 minutes left to get started.

No battle plan survives contact with the enemy and our bike plan of not taking in the large obvious loop eventually went out of the window. We picked up the Mary Towneley Loop near Rodmer Clough and rode all the way round anti clockwise to Long Causeway. It looked slightly different going the other way from my previous expedition but some bits were very familiar. This is the first time I've ever had anything approaching local knowledge on an Open 5 event and it was welcomed!

Clever Google stitched this panorama without being asked!

Everyone coming the other way at Widdop res were telling us that control 24 wasn't to be found but we stopped for a look anyway.

Is it here? Or perhaps it is here? No?

But it didn't matter, we had a great ride over all different kinds of surfaces from fast bridleway, muddy steep descents, rocky climbs, bits of road and rutted stone sets. Definitely a good day to be out and about. We were also glad to not find the permissive bridleway that dropped down to the back of Cant Clough reservoir, it sounded like a right old miserable mud fest! Going the long way round worked out pretty well.

It wasn't long before we picked up on a bit of trail I recognised from the Haworth Hobble and we were bombing back down into Todmorden and back to the school. Emma is a good rider and I can just about keep up with her on the descents. A longer than preferred bike ride at around 3h 45m and 24 miles but crucially we had fun and sometimes that is what matters.

I refuelled with lots of water in transition as I'd dropped my water bottle on a bumpy bit of bridleway and lost the contents. We knew we didn't have time for many controls on the run so just went for the nearest ones, slogging up the wooded cliff (hill seems too kind) behind the school to pick up a couple of high points value controls.

We had one wrong turn on an overgrown path before we put ourselves right. Bumped into an ex colleague, Dave W, at this point who was racing. He let us photo his control description sheet as I'd lost mine on the bike ride and Emma left hers in transition. Ooops!

It was a right slog up this hill...

We picked up another well hidden control affixed to a railway bridge; the lack of the usual red/white warning tape that is normally affixed to the controls made a big difference in ease of locating them! Then the short steep climb up to Rake End where a marshal was stood holding the control for us to dib before hammering it back down the hill for one last control near a farm. At this point we knew we were going to be late back, the question was, how late?

Flying totally by instinct, I led us wiggling and winding down steps and snickets, mostly guessing what seemed like the best path through the Salford area of Tod, dropping us out by the Golden Lion pub on the canal.

We belted it back along the main road; I haven't run that hard for a while and was only just keeping going, Emma not far behind, with the finish in sight. The event clock was pointed away from us. Did we make it back in time? 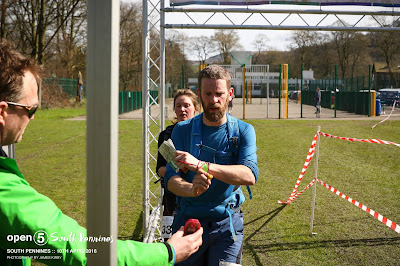 The faces say it all.

We dibbed into the finish just three minutes late dropping 6 points, not bad considering I was expecting to be at least 10 minutes late. A couple who were descending from our next to last control turned up about 5 minutes after us with a puzzled "didn't we..." "how did you get back so quick?"

Downloaded, 384 points scored, happy with that! Should put us in the top half for the mixed pairs, I thought. Got changed, acquired a well needed cuppa and wandered in to the hall to catch the end of the prize giving.

We were pleased to have made 4th place in the mixed pairs but the scores from the lead guys and girls was really impressive, they must have cleaned up the entire course!

Also the prizes were being given out for the series with some very deserved wins. Even though the came second on the day by a whisker I was glad to see Rosemary (check out her blog) and Lucy win the Female pairs overall. We chatted with Lucy afterwards and said congrats. It never ceases to amaze me how many people in the AR community that Emma knows and that know her!

One shower later and I took the lovely Louise out for a tasty curry to celebrate a good race result and her having a successful wedding fair earlier that day. We were very hungry!